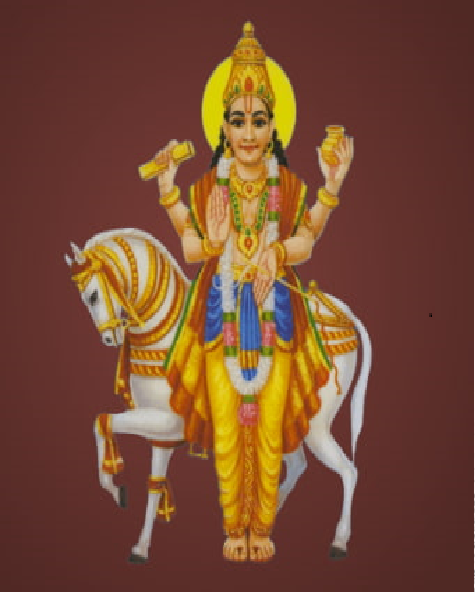 The Story of Shukra, the Preceptor

In times of yore, sage Ushana, son of the sage Bhrigu, performed rigorous austerities. For several years, he meditated upon Lord Shiva with utmost devotion. He constructed a ‘Shivalinga’ and offered worship to the Lord in several ways, with flowers and incenses, using hymns and incantations. But even after five thousand years of his tireless worship, the Lord did not manifest Himself before the sage to grant him a boon.

The sage, however, did not give up his resolve. He resorted to an extremely difficult discipline of body and mind. He controlled his senses and stabilised his mind, and totally submitted himself to the Lord. Besides, he undertook severe mortification of his body, denying himself the normal food and drink, living on nothing but thin air. When another thousand years of this strict discipline went by, the Lord was pleased with the perseverance and single-minded devotion of the sage. Out of the ‘Shivalinga’, He manifested Himself, glowing like a hundred thousand suns in front of the sage.

“O’ blessed son of Bhrigu,” said Lord Shiva, “You are verily an embodiment of devotion. Ask for any boon so that I should grant it to you.”

“Please accept my salutations,” replied the sage with humility, chanting numerous verses in praise of the Almighty Lord.

The Lord was highly pleased. He said to the sage, “Dear one! Seeing your strict self-discipline, your unfaltering devotion, your worship of My ‘Linga’ form, your sense of total surrender, and your pursuit of this discipline in this sacred land of Kashi, I am pleased to consider you as My own son. Nothing there is that I need to withhold from you.”

Lord Shiva, immensely pleased with sage Ushana, granted him the knowledge of the Mrita-Samjivini, the secret of bringing the dead to life. The Lord spoke thus to the sage:

“In course of time, while in this very physical body of yours, you will enter My body and be released therefrom. I grant to you the secret of the Mrita- Samjivini since, with all your self-control and your unswerving devotion, you are fully capable of handling this supreme knowledge. While you will be able to conquer the Devas (the gods), none will be able to subjugate you. In the sky you will abide like a glowing star, your brilliance matching that of the Sun and the Fire. Amongst the ‘grahas’, you will be considered the foremost. And those who commence their journey with you in front of them will perish. Men will conduct their auspicious deeds, marriages, and the like, only when you have risen in the sky. The Nanda tithis (i.e., the lunar dates 1, 6 and 11) will become favourable by your association. Your devotees will acquire masculinity and beget many children, and they will all be learned and happy.”

After blessing the sage in such generous a manner, the Lord shrank into the ‘Shivalinga’ which He had just a while ago emerged from.

The sage in a subsequent transformed form came to be known as Shukra, the planet Venus of the Vedic astrology. Very learned, possessing even the knowledge of reviving the dead, he was a great help to the Asuras (the demons), whose preceptor (Acharya) he was, in their battles with the Devas (the gods). He would revive the dead Asuras who would get up afresh to fight the gods even after being fatally struck in battle. Brihaspati, the preceptor of the gods, did not possess this wisdom rendering the battle between the gods and the demons an unequal one favouring the latter.

Shukra (Venus) is an extremely important graha in Vedic astrology. Auspicious events, like marriage, etc., are undertaken only when Venus is not combust. Important journeys too are avoided when the planet is combust. Events related to marriage, sex life and progeny are intimately related to the disposition of the planet Venus in the horoscopic chart. It is said that journeys undertaken while Venus is ‘in front’ (Sammukha Shukra) must be avoided. Venus rises in the east when its longitude is less than that of the Sun; during these days, journey toward east should be avoided. It rises in the west when its longitude is more than that of the Sun; during this period, westward journey should be avoided. According to another method, the four directions, from the east through the south and the west to the north, are represented by the four groups of seven nakshatras (including Abhijit’) each, i.e., Krittika to Ashlesha, Magha to Vishakha, Anuradha to Shravana, and Dhanishtha to Bharani, respectively. When Venus is transiting these nakshatras, journeys in the respective directions should not be undertaken.

How did Shukracharya get his name? The Pauranic story related to this is given below.

Andhaka, the demon king, conquered the three worlds and greatly tormented the gods. When his excesses went beyond all limits, it fell on the shoulders of Lord Shiva to set him aright. During his battle with Lord Shiva, Andhaka started losing his men and material at a rapid pace. Greatly perturbed at this, and recalling that his preceptor Sukracharya possessed the secret of defying death, Andhaka approached the sage and begged of him thus:

“Blessed sage! Please use your knowledge of the Mrita-Samjivini to revive our dead Asuras, and save our race from extinction.”

Shukracharya pondered for a while but, bound by the discipline of helping the one who besought help, felt it only appropriate to meet the requirement of the demon king. He went to the battlefield and, humbly meditating on the master of this supreme secret, Lord Shiva, applied his knowledge to each dead demon. This would bring to life the erstwhile dead demon who, as if waking up from a refreshing sleep, would again be ready for battle. This greatly annoyed Lord Shiva who got hold of the sage and swallowed him in one quick morsel.

In the stomach of Lord Shiva, the sage offered prayers to the Lord and invoked Him for mercy. Pleased, the Lord asked the sage to demand a boon, and the sage promptly demanded:

“Please let me out of Your abdomen.”

The Lord said, “Alright! You may come out.”

The sage roamed around in the stomach of the Lord for a hundred years but found no outlet. In there, the sage had a vision of all the different worlds and universes, the gods, the demons, the numerous species of beings on the earth and in the heavens; in brief, he encountered within that confined space all existence as well as non-existence. Finding himself too minute to be able to go beyond the limits of the Lord, the sage once again prayed to the Lord with utmost devotion and intensity, seeking refuge in His benevolence and requesting his release from His body.

The Lord laughed and said, “Having been established inside My abdomen, you now qualify to be considered My son. I shall now release you from My body and henceforth you will be known as Shukra.”

The sage got absorbed in the blood-stream of Lord Shiva and got secreted in His semen. He was then discharged through His urethra as the seminal fluid of the Lord. ‘Shukra’ in Sanskrit means ‘semen’.

In the Shanti Parva of the Mahabharata, Bhishma, the grandsire, narrates the story of Shukra to Yudhishthira, the Pandava king. According to Bhishma, Ushana, the son of sage Bhrigu, was swallowed by Lord Shiva, and released through His urinary bladder as Shukra.

In Vedic astrology, Shukra (or Venus) rules over the seminal fluid of the native. In the Puranas, Shukra is considered a ‘male’ though he is considered a ‘female’ in Vedic astrology. Shukra also rules over the genitourinary system of the native. It is a watery planet and, therefore, has a control over the hormonal system of the body. Being the preceptor of the Asuras who are known to indulge in all physical and material enjoyments, Shukra also deals with music, fine arts, poetic talents, physical comforts, high status, sexual pleasures and perversions, and the ailments consequent upon over-indulgence in pleasures.

Elsewhere in the Mahabharata, it is described that sage Kavi (another name for Ushana) was the son of sage Bhrigu, while Shukra was the son of sage Kavi. Having become a ‘graha’ (‘a planet’, in Vedic astrology), Shukra “creates rain and drought, as well as fear and fearlessness, to sustain life in the three worlds. Extremely wise, Shukra alone is the teacher of the ‘Yoga’ and the preceptor of the demons. By the strength of the ‘Yoga’ only, adhering further to restraint and discipline, he alone manifests as ‘Brihaspati’ (Jupiter), the preceptor of the gods.”

Once upon a time, Devayani, the beloved daughter of Shukracharya, was humiliated by the arrogant daughter of the then Asura king named Vrishaparva, and was described by her as the daughter of a court sycophant. Devayani was deeply hurt. Shukracharya consoled her with several words of wisdom. Some of his observations indicate the role of Shukra in astrology.

“Daughter dear,” said Shukracharya, “You are not the daughter of a sycophant but of a pious Brahmin who worships none and whom all others worship.”

He went on further: “By the grace of Lord Brahma, all that embellishes this world and the other world, and all that the living beings possess, all that belongs to me. For the well-being of the mortals, I alone cause rains and nurture all herbs.”

In Vedic astrology, Shukra is the ruler of all material possessions and objects of enjoyment. All vegetation, including herbal medicines, fall under the rulership of Shukra only. We have already mentioned that Shukra is a watery planet in astrology. He tends to neutralise the influence of planets that affect drought.