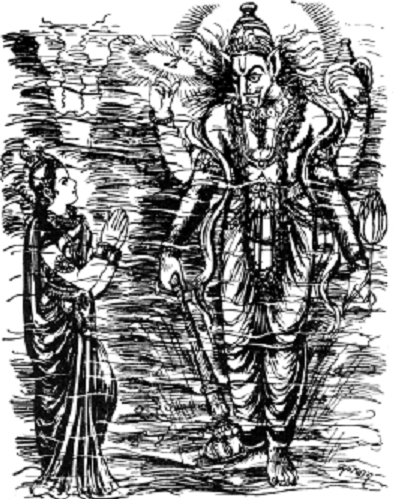 The Story of Mangala or Mars

A cycle of creation coincides with the day of Brahma, the Creator. When the Lord sleeps, there is a phase of Annihilation and total inactivity. Another cycle begins as the Lord wakes and engages Himself in the process of creation. Countless such cycles go on incessantly extending beyond beginning and end.

There was naught else but water before the beginning of the new cycle of Creation. When Lord Brahma got up at the end of His night, He found all existence non-existent. There was no light, no wind and no motion, only a limitless body of water which was the body of Lord Himself. The Lord had engulfed even the Mother-Earth, the support for all life-forms, into His abdomen at the beginning of His slumber. He thought of creating the Universe once again.

From His own body, Brahma the Creator produced Swayambhuva Manu and his consort Shatarupa. He then bade Manu to beget progeny through the sexual process. Lord Brahma had earlier produced His children through mental activity but they could not effectively populate the earth. Manu agreed to do his father’s bidding but needed some land to settle on. He thus requested Brahma, his father, to retrieve the Mother-Earth from the bosom of the immense Ocean.

Lord Brahma concentrated on the import of His son’s request.

“Even while I am engaged in the process of Creation,” He pondered, “Vasundhara, the Mother-Earth, lies somewhere at the bottom of this Ocean. Some means there must be to retrieve Her. What should I do about it?”

Even as Lord Brahma was immersed in deep thought, a tiny youngone of a boar, not larger than the distal phalanx of His thumb, emerged from His nostrils and in no time acquired the size of an elephant, dangling in the empty space. Manu as well as the rishis gathered there were astonished and offered prayers to this manifestation which they considered as a blessing from the Almighty Lord. Soon this Boar attained the dimensions of a huge mountain and started roaring with great force. This was the ‘Varaaha’ or the ‘Boar’ incarnation which the Lord had acquired in order to retrieve the Earth from the bottom of the Ocean.

The mighty Varaaha smelt for the Earth with His snout in all directions. Then, with a heavy thud, He jumped into the water, as if tearing through the very abdomen of the Ocean, creating a terrible sound. He pierced through the endless body of water and found the all-sustaining Earth resting at the bottom of the Ocean. On His jaws He lifted the Earth, even as an elephant adorns his head with a bunch of flowers, and brought Her to the surface.

There He placed her on the surface of water to float like a lotus-leaf. It is said that the serpent-king Shesha-naga supports the Earth from below lest it should tumble over. Lord Varaaha then planted various mountains as well as other geographical features here and there on the surface of the Earth in order to enable Her to sustain life.

The demon-king Hiranyaksha was very powerful. He had attained immense powers through austerities. Intoxicated by his physical might, he tormented the gods who ran helter-skelter in front of him. Looking for a worthy match, he jumped into the Ocean and confronted Varuna, the sea-god. Varuna, however, declined to fight him suggesting that he face Lord Varaaha for an appropriate combat. Hiranyaksha liked the idea and proceeded towards the bottom of the Ocean where Lord Varaaha was engaged in retrieving the Mother-Earth. The demon mocked at the Lord.

“Hey, wild animal, where have you come from?” he roared on seeing Lord Varaaha. “You pig of a godling,” he continued, “you cannot proceed without fighting me.”

Lord Varaaha, however, ignored the demon and brought the Earth to the surface. Having stabilised her on the surface, He engaged the demon in battle and after playfully fighting him He finally killed him with His bare hands.

The Earth, having been established in her orbit, felt relieved and comfortable. In Her immensely beautiful natural form, She approached Lord Varaaha, now in a highly attractive appearance, and sought His physical association. The two together spent one divine year, away from the eyes of the world. They lost all sense of day and night during this period. At the end of one year, Lord Varaaha offered obeisance to Her and parted. By this time, the Earth was pregnant. She gave birth to Mangala and brought the child up with great love. Later, Mangala was given the status of a ‘graha’ or planet by Lord Shiva. Mangala or Mars being the son of the Mother-Earth, is a significator of land, houses, home, soil, earthenware, and even endometrium (the ‘soil’ where the ‘seed’ is sown and progeny results).

Long long ago, Daksha Prajapati, a progenitor of the human race, gave his daughter, Sati, in marriage to Lord Shiva. He, however, soon developed a dislike for his Son-in-law. Once Daksha undertook a grand yajna or sacrifice. Lords Brahma and Vishnu, as well as several exalted rishis, renunciants, gods and celestial beings were invited to the yajna and offered due obeisances and respects. Such a courtesy, however, was not extended to Lord Shiva, who was not even informed about, let alone invited to, the yajna.

Sati, the divine consort of Lord Shiva, saw the Moon-god with his consort Rohini proceeding in a hurry. Through a friend of hers, she came to know that they were going to attend the yajna of Daksha Prajapati. Sati was perplexed.

“My father is conducting a yajna and we have not been informed about it,” she thought. “Even my mother seems to have forgotten me. I should ask Lord Shankara the cause of it.”

She went to Lord Shiva and enquired why He was not inclined to attend the sacrifice being conducted by her father.

The Lord replied in a sweet tone, “Blessed one! Those whom your father considers worthy of respect are already attending the yajna. Dear one!” He continued, “Those who intrude anywhere uninvited suffer humiliation worse
than death.”

Sati was not completely satisfied. She also wanted to find out why her father had not invited her husband, Lord Shiva, the Lord of the gods and the Essence of all yajnas.

“Lord of the three worlds,” she said, “please permit me to go and attend the yajna.”

Lord Shiva was aware of the inevitable future. He permitted Sati to go to her father’s house. When Sati met her father, she enquired why her husband, the Lord of the three worlds, was not invited to the yajna. This infuriated Daksha who spoke thus to Her :

“Dear daughter, you are not really needed here. You may stay here or go away as you please. You have not been invited. Your husband, the so- called Shiva, is an emblem of Amangala (inauspiciousness). He is unclean, unkempt and the lord of the inauspicious spirits. He does not deserve to be invited to a yajna of this stature.”

Sati was deeply hurt at the venom her father had spewed against her beloved husband. Unable to tolerate this humiliation, she jumped into the sacrificial fire and died.

When Shankara got the news of His wife’s death in the sacrificial fire, His wrath knew no bounds. He decided to destroy both Daksha and his yajna. From the forehead of the infuriated Lord trickled a drop of perspiration which immediately transformed into a strange man-like form with innumerable faces and eyes, and with thousands of hands and feet. This dazzling being was Virabhadra, the frightful destroyer of the yajna as well as all that was related to the yajna. Lord Shiva thus spake to him:

“Valiant Virabhadra! Go immediately and destroy the yajna of Daksha.”

Virabhadra proceeded fast to the yajna. A great battle ensued between Virabhadra and his followers on the one hand, and the several gods on the other. Daksha tried to seek the assistance of Lord Vishnu who declined to help saying, “The only way out is to placate Lord Shiva and seek His forgiveness.”

The gods suffered defeat at the hands of Virabhadra. The yajna was destroyed. Daksha himself was beheaded by Virabhadra and his head burnt in the yajna-fire.

Virabhadra finished off all that stood in his way. He pierced through the nether-world and dried off the oceans. Then he readied himself to burn into ashes all the three worlds. At this, Lord Shiva stopped him saying:

“Virabhadra! You have already destroyed the yajna of Daksha Prajapati. Control your urge to destroy the rest of the creation. Bathe now and be a source of peace to all grahas. You will acquire the name Angaraka (‘burning charcoal; an incendiary spark’)”.

Virabhadra immediately became pacified. Soon he took birth as Mangala from the Mother-Earth and, with the blessings of Lord Shiva, acquired the status of a graha.

The word ‘Mangala’ literally means ‘auspicious’. Mars, however, also represents the fury of Virabhadra. The disposition of Mars in a horoscope is an important factor to be considered while matching horoscopes for matrimonial purposes. ¦