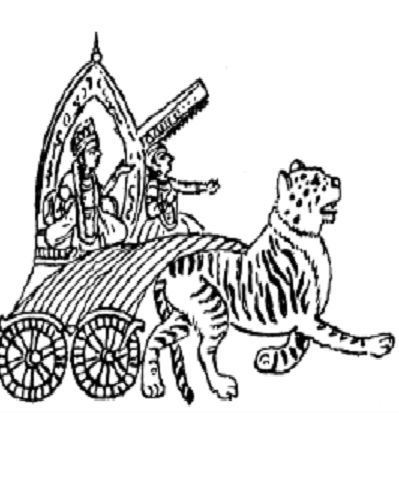 The Story of Budha or Mercury

Tara, the wife of sage Brihaspati, the preceptor of the gods, was an embodiment of virtue and beauty. Perfect in all body parts, dressed in a thin bathing robe, and endowed with superhuman loveliness, she emerged from the river Ganga after having a bath and proceeded homeward. It so happened that Soma, the Moon-god, was roaming along the banks of the river at the same time. Seeing this specimen of rare beauty and youth, he was immediately struck by the arrows of Kaama, the god of Love, and was overcome with an irresistible desire to possess her. Forgetting about her status of being the wife of his divine teacher, an equivalent of a mother and thus worthy of all reverence, he went to her and unashamedly spoke out his heart.

“Best of women,” said the Moon-god, “you are young and lovely. Fate has only cruelly ordained that such a voluptuous beauty should spoil her youth with an old and austere fool of a husband. Such rare youthfulness does not last forever. Waste it not thus on an insentient husband. Yours is the age to enjoy. Come with me and experience the pleasures of the body.”

Even as the wife of his divine preceptor rejected his overtures and offered arguments against such a fallen deed, the Moon-god, drunk with power and blinded by lust, pulled the young lady up into his chariot and drove away with her. They wandered in several fascinating spots and beautiful vales, and enjoyed immense physical pleasures. As the gods mounted pressure on the Moon to return the wife of Brihaspati to her rightful husband, he took refuge with Shukra, the preceptor of the demons, all the time insistent that he would not yield. It was only after a long persuasion that Tara was returned to her legitimate master.

Since Tara was pregnant when she was returned to sage Brihaspati, the latter asked her to abandon her pregnancy as it was inappropriate for her to carry a child of someone else. She agreed and aborted the child in a deserted place. The child did not die, however. This child was Budha or Mercury, the wise and extremely intelligent son of the Moon.

Budha is very handsome in appearance and has a beautiful and slim body. Right at the time of his birth, the effulgence from his body blunted the spiritual sparkle of the gods. They all gathered to ask Tara who the father of this lovely child was. Eventually, Tara disclosed to lord Brahma that he was the son of Soma, the Moon-god. Knowing this, the Moon-god came over, embraced the child, and named him Budha, the enlightened. The Harivamsha Purana states: ‘When this Budha manifests himself in the sky, he causes sudden upheavals.’ Those who relate weather fluctuations with astronomical events are aware that sudden significant changes in weather occur at the time of rising or setting of Mercury, or also when it becomes retrograde, or attains direct motion after retrogression, or becomes conjunct with the Sun.

Mercury is the planet of logic and discrimination. Afflictions of Mercury in the horoscopic chart lead to various forms of distorted logic and psychiatric ailments. Mercury is also the planet of communication, and a good and meaningful speech is the gift from a strongly disposed Mercury. Witty language and speech with multiple meanings, mathematical logic, astrological and scriptural knowledge, and profound intellect are governed by Mercury. He excels even Jupiter in knowledge and wisdom. The mutual dasha-antardashas of Mercury and the Moon impel the native to take sudden and erratic decisions depending upon their disposition in the horoscope.

Mercury is considered as a eunuch in astrology. Sexual debility and impotence are the areas ruled by Mercury. However, in the Pauranic tales, Mercury is a male and the Chandravamsha (the lunar dynasty) has been effected through him only. The Moon-god was overcome by Kshaya Roga (or tuberculosis) soon after the birth of Mercury and had no progeny from his twenty-seven wives, the nakshatras. The story of Mercury begetting his son, as narrated by lord Rama to his younger brother Lakshmana, is as follows:

During the very early times, there ruled over Bahlika-desha a very virtuous king named Ila, the son of the Prajapati Kardama. He conquered the whole earth and looked after its inhabitants as his own children, always keeping himself established in righteousness.

Once king Ila, accompanied by his soldiers and followers, went out hunting in the forest. There he killed thousands of beasts of prey. Later he strayedinto an area where lord Shiva was engaged in entertaining His divine consort Uma (the goddess Parvati). The darling of goddess Uma had takenup a female form and was engaged with her in recreational activity beside a waterfall. Everything in that vicinity which could have been masculine, whether animal or plant, had transformed into its equivalent feminine form.

As king Ila stepped into that strangely charmed mountainous region, he found himself as well as his followers transformed into women. The strong and handsome king had changed into a young woman of immense beauty. Dismayed, he proceeded to lord Shiva to beg of Him for freedom from this predicament. The Lord smiled at the king and agreed to grant any boon other than his masculinity.

This was no consolation to the king. He sought no boon of the mighty Lord. However, even in his desperation, he thought of a way to solve his problem. He approached with all devotion and humility the goddess Uma, and begged of her to grant him his lost masculinity. The benevolent goddess decided to help him. She spake thus to the king, “I can grant you only half the boon. The remaining half falls under the authority of lord Shiva and He has already refused to grant you that. Accept thus only half the boon from me. You may choose to remain in feminine form for a specified period and regain masculinity for an equivalent period of your choice.”

The king was pleased at his partial recovery. He demanded that he be permitted to retain by turns femininity for one month and masculinity for yet another month. The goddess granted this to the king adding, “You would forget about your masculinity during the phase of femininity, and vice versa.” Thus king Ila, in his feminine form Ilaa, started roaming about in the forest and came, out of the feminising zone, on to a pool wherein Budha, the bright and sagacious son of the Moon-god was busy in ascetic penances. Ilaa descended into the pool and, splashing water here and there along with ‘her’ followers, disturbed Budha engaged in meditation.

No sooner did Budha see Ilaa than he fell in love with ‘her’, the most beautiful ‘maiden’ on earth. Later, through yogic powers, Budha came to know of everything that had happened. He directed Ilaa’s followers, now all ladies, to seek their own dwelling places in the mountains around and wait till they all would get their husbands. In due course, these women obtained their befitting mates.

Budha and Ilaa started living as man and wife. After the expiry of one month, Ilaa changed into Ila, the king. He enquired about his followers. Budha told him that his followers had all perished and only he, the king,had survived; in any case, he was welcome to live i n the forest with Budha. But Ila remembered of his kingdom and wanted to return. Budha requested him to stay in the forest for a period of one year after which he (Budha) would help the king to return to his kingdom. The king agreed.

Ila would change into Ilaa and then back into Ila at monthly intervals. During his womanhood, he would live with Budha as his wife and forget about his being a king. During his manhood, he would forget about his female transformation and busy himself in meditation. During the ninth month, while in the female form of Ilaa, ‘he’ gave birth to a son who later became the brave and mighty king Pururava. It was king Pururava who continued the Chandra-vamsha (the lunar dynasty).

Lord Rama thus narrated the story of the birth of the son of Budha to his younger brother Lakshmana. This story was told to emphasise the virtues of conducting an Ashwamedha yajna. At the end of one year, Budha thought of means to undo the curse that had befallen on king Ila. He talked to several leading rishis of that time about this problem. Prajapati Kardama, the father of Ila, was present too. He said to the assembled rishis, “Blessed ones! There is none other than lord Shiva who can rid my son of his ailment. And there is nothing that pleases the said Lord as much as does an Ashwamedha yajna.”

The sages agreed. They arranged for the yajna to be performed. At the end of the yajna, lord Shiva manifested Himself and asked the sages to seek a boon of Him. They all demanded that Ilaa, the woman, be permanently converted into Ila, the man.

“So be it,” said the Lord, and disappeared.